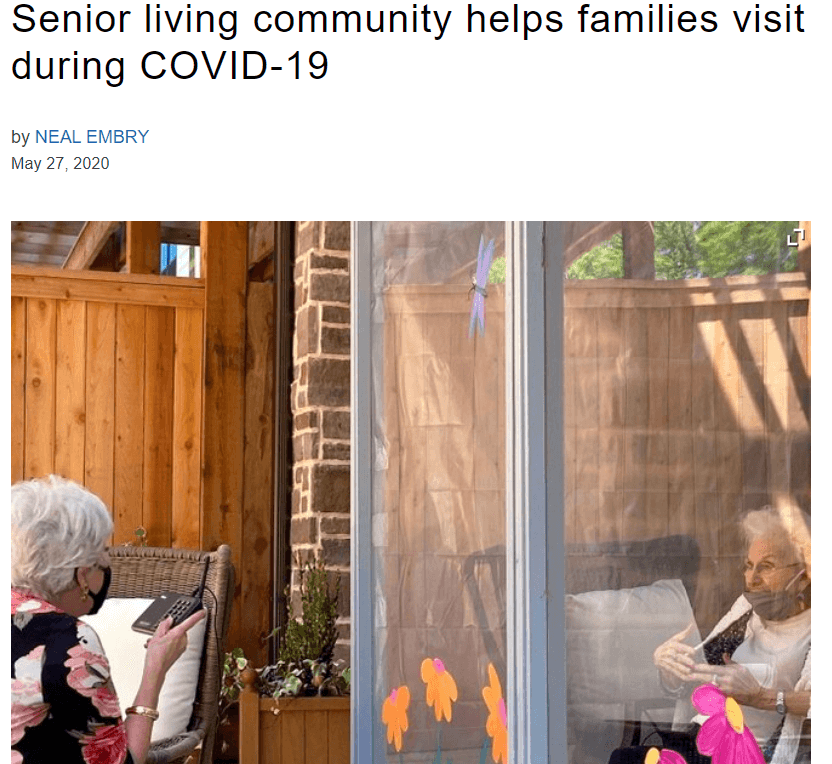 Cheryl Gore, left, talks to her mother, Dorcas Monroe, a resident at Longleaf Liberty Park. With in-person visits altered by the COVID-19 pandemic, Longleaf recently installed a plexiglass wall that maintains a barrier between residents and visitors but allows them to still see and talk to each other.

When Cheryl Gore’s mother, Dorcas Monroe, moved to Longleaf Liberty Park in November, Gore got accustomed to visiting her 93-year-old mother on a daily basis at the Vestavia Hills senior living community.

But when COVID-19 began spreading across the globe a few months ago, that changed.

“It’s been very confusing for her,” Gore said. “She doesn’t understand what’s going on.”

Gore said her mother is in memory care, and while they were initially able to talk over FaceTime when the virus first struck, it was still difficult because her mother didn’t understand why Gore wasn’t there.

However, thanks to the installation of a new plexiglass wall in the community’s courtyard, Gore and her mother are now able to see each other every week.

Longleaf installed the wall and had it decorated by a community artist. Visitors take 30-minute shifts in the courtyard, with visitors on one side of the wall and residents on another side. Both the visitor and the resident wear masks for protection, and they speak to one another using a two-way speaking device.

The first time Gore met her mother outside, her mother was confused about the situation, but once she realized what was going on, things changed before the second visit. Gore said when her mother knew she was coming, she talked about how she made sure to wear nice clothes and fix her hair.

“It’s given us an opportunity to get together,” Gore said. “It’s been a real blessing for me. … Even though we can’t touch each other, it’s so much more personal.”

“That has really uplifted their spirits,” Carter said.

The glass was designed by Robins and Morton and was painted by artists. Carter said she’s worked to incorporate art in the visitation time.

Families and other visitors are screened before seeing any resident, and they don’t actually enter the community; they head straight for the courtyard, Carter said. All visitors must meet Centers for Disease Control and Prevention guidelines during screening to enter the courtyard.

The new tool is helpful as Longleaf was not included in the list of businesses allowed to reopen under Alabama Gov. Kay Ivey’s April 28 order.

“We’re going to be doing this for a little while,” Carter said.

At the outset of the virus, Carter said she thought it would be a couple of weeks and then things would go back to normal. The staff is now doing their best to keep everyone busy and healthy, as well as keep them connected to their family.

While it can be a struggle finding something for residents to do during lockdown, Carter said one of the most important things is having those visits with family. Because of the plexiglass, that’s now an option for many.

Let’s talk. We’d love to meet you, show you around and answer all your questions. Even the tough ones.